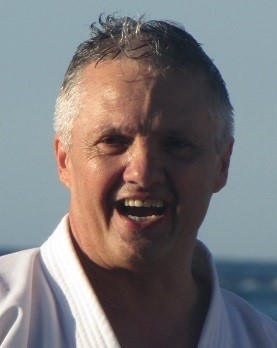 Sensei John Shaw started his karate journey in 1979 in the Berg Street Dojo in Cape Town with Sensei Eric Smith and Sensei Gilbert Pierce. After a terrible fire, the dojo was destroyed and moved to Long Street. This prompted Sensei John Shaw to move to the Claremont Dojo under the tutelage of Shihan Chris Thompson.  Sensei John Shaw also trained with the founder of our Shukokai Style, Soke Kimura, cementing his technique and passion for the long karate career that has followed.  Sensei John is a passionate teacher who loves to share his knowledge with his students.

Kimura Shukokai karate presents techniques that are explosive, practical and natural for all to achieve.  The Samurai Karate Hout Bay dojo accommodates classes for students ranging from four years old and upwards. Karate attracts students of both genders, those with combat experience and beginners.

Also on offer is personal training, which helps individuals to achieve goals such as fitness and weight loss, and personal self defence, which involves high-cardio workout sessions led by qualified instructors. Contact the Samurai Karate Hout Bay Dojo of Kimura Shukokai International and come train with us today.  Your first session is free so come and see what we are about.